History of Oriental Rugs goes back to the glacial vastness of Siberia’s wasteland, when a team of Russian archaeologists in 1949 discovered a unique treasure.

Working 5,000 feet above sea level in the Pazyryk Valley of the Altai Mountains, they found the solidly frozen tomb of a Scythian chieftain who died about 300 years before the birth of Christ. Entombed with him was a priceless example of the rug maker’s art – a beautifully preserved hand knotted wool carpet.

Today, this art treasure hangs in Leningrad’s Hermitage Museum. The Pazyryk carpet, as it is known, symbolizes a craft which became an art form, and a tradition of which true age is unknown. The early artisans who wove it employed the same basic techniques pass on from generation to generation, to modern Oriental carpet weavers – the woolen warp, weft and pile, the knots identical to present-day knots tied 240 per square inch, sized 6’x6’7″, is an inspired design of glowing colors which have retained their brilliance to this day. 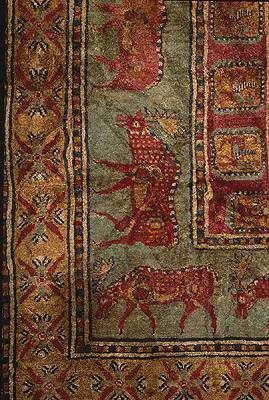 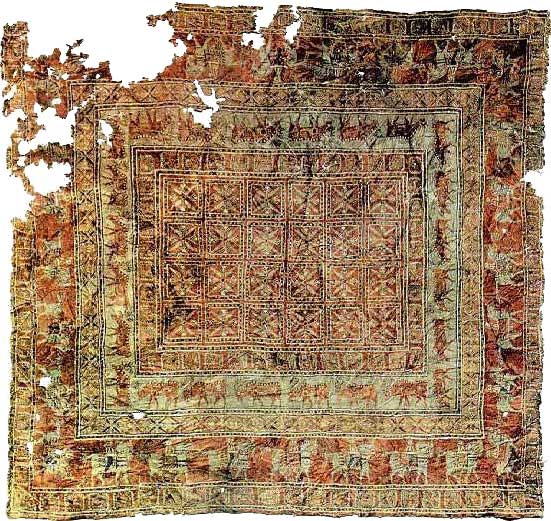 With an ancient heritage providing ample proof of the practicality and aesthetic value inherent in the fine carpeting, it is hardly surprising that carpets are among the most important investments in interior décor.

Floor and wall coverings may be as ancient as mankind, but where and when the first knotted textile rugs were woven is not known. Recent discovers indicate the earliest successors to fur pelts were known to be existent as long as 5,000 years ago. Woven rugs have been essential household articles in primitive nomadic societies, as well as in modern civilizations.

The Greek historian Herodotus (about 500 B.C.) and the poet Homer made vivid reference to the beauty and splendor of Persian wool rugs. Legend has it that Cleopatra had herself rolled into a Persian rug to make a surprise appearance before Julius Caesar. There is a wealth of evidence to show that wool rugs were respected in the Near and Far East as examples of fine art long before the birth of Christ. Later, rug weaving became deeply rooted in Eastern religions. It was perpetuated over the centuries, and to this day that ancient craft is handed down from master to apprentice, and parent to child. The tools and basic process have not changed; today’s genuine Oriental rugs are still hand-knotted, as they were at the dawn of recorded history. The only significant improvement came through the development of better natural dyes sometime between the 16th and 17th centuries.

Among the most famous rugs in history was the Garden Carpet of Khosro I (also known as the ‘Spring of Khosrow’ carpet as a reminder to the king of beautiful compound gardens in the winter), was approximately 90’x90’ in size1. Made of silk, embellished with gold, silver, and precious jewels, the Garden Carpet was originally valued at about the equivalent of $200 million + dollars in modern currency. It was seized in 635 A.D. by victorious Arabs after the fall of the Persian Empire, cut apart, and sections were sent to allies and friendly rulers. Later on, the remaining sections were cut into 6,000 segments and distributed to Arab soldiers, who sold this booty for approximately $2,500 a piece. For the next 1,000 years, fragments of this rug were used as design models by weavers throughout the East. Examples such as the eighteenth Century North Persian ‘Wagner’ Garden Carpet below may have a undocumented lineage of motif in the spirit of the famous ‘Spring of Khosrow’ carpet. 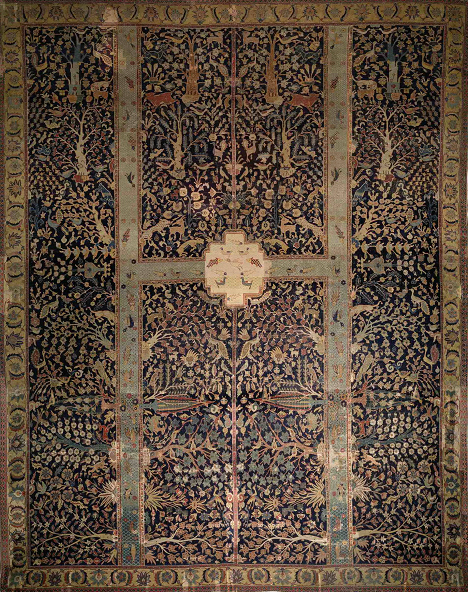 Oriental carpets were introduced to the Western world in great part as the result of the Crusades of the 11th, 12th and 13th Centuries. They adorned churches, palaces, and were greatly prized as elegant accoutrements in the homes of the wealthy. Imparting warmth as well as color and beauty, they replaced in more modest homes the primitive loose rushes which had previously been used as floor coverings in England and other Western nations. 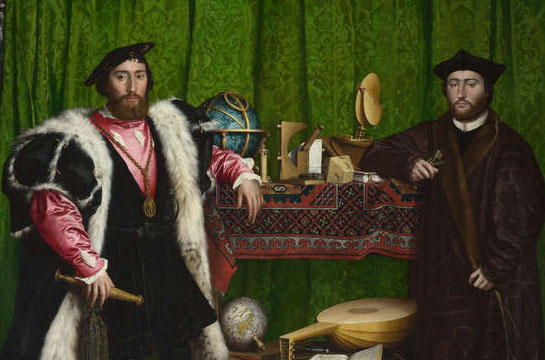 By the late 14th and 15th Centuries, Anatolian (Turkish), and Caucasian carpets were well established in Europe. Great Italian and Flemish artists often introduced them into their paintings. Wealthy merchants invested huge sums on the best specimens; in later years, the inventory of a famous banking family, the Fuggers of Augsburg, itemized large numbers of Oriental rugs. 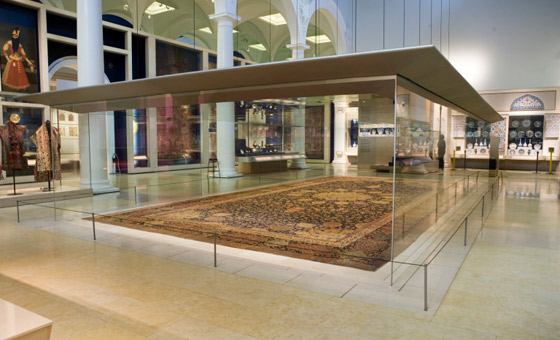 Perhaps the most famous rug in the world is the Ardebil Carpet2, a 16th Century creation now in London’s Victoria and Albert Museum whose sacrificed twin resides in the LACMA museum. Its creator, the famed Maksoud of Kashan, devoted his artistry and 30 years of his life to the creation of this magnificent rug. The Ardebil; rug contains more than 33 million hand-tied knots, and measures 34’6”x17’6”. Through the centuries, the Ardebil design has been duplicated again and again, which very skillfully rendered reproductions were manufactured by Dilmaghani in the earlier part of the 1900’s bearing the Cyrus Crown. 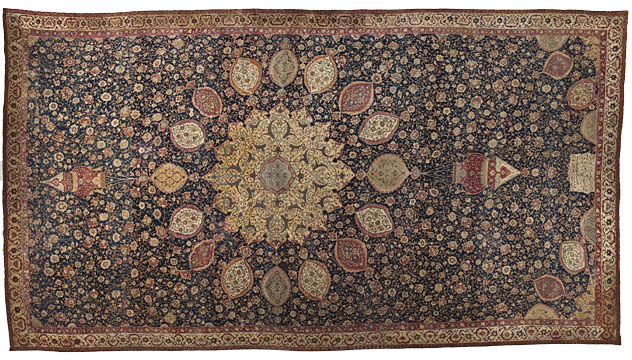 By the 19th Century, fine Oriental rugs were appearing in numbers in the United States. Used here almost exclusively as floor coverings, they were very quickly accepted for their practical durability as well as their beauty. Through many changing styles in interior decorating, they have been sought by collectors, designers, and discerning connoisseurs.

Recently a great revival of interest in fine Oriental carpets has been noted. Stimulated by a widespread recognition that these creations – over and beyond their current beauty – represent an investment whose value can increase over the years. The revival has also helped spur a new opulence in floor treatments – hardwood floors dramatically enhanced by Oriental rugs of varied styles and sizes; exotic concepts that have utilized Oriental carpets in living areas already covered with wall-to-wall carpeting. This rug-on-rug effect is similar to floor treatments favored in palatial homes in earlier times.

While modern Oriental rugs come in a range of prices, they all typify refined taste, and the finest examples are equated with wealth.

*1 During the three centuries of Sassanian rule in Persia – A.D. 224 – 641 – some of the Sassanian carpets were in reality embroideries embellished with many precious stones. The immense Garden Carpet of Khosro I, used in the great hall of Ctesiphon’s palace, was so emblazoned with jewels and gold. Said to have measured 90’ x 90’ and weighing over two tongs, the rug could not have been woven in one piece, since no tree in Persia would have been large enough or strong enough to serve as the loom beam necessary to handle so massive a piled carpet.

*2 Although this rug and its twin are known by the names of ‘Ardebil,’ They were probably made in the city of Isfahan or Kashan, by Maksoud of Kashan, for the Mosque of Ardebil. The Ardebil mosque was founded by Sheik Safi, head of the Safavid Dynasty. Hence the rugs have become known as the Ardebil rugs. An inscription in the carpets clearly show the date of completion as being the year 946 of the Persian calendar. The corresponding Christian year is 1540 A.D., during the reign of Shah Tahmasp. 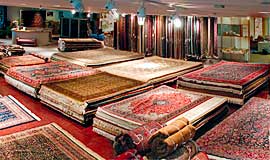 One of the largest inventories of Oriental Rugs in the US and Tri-State area. 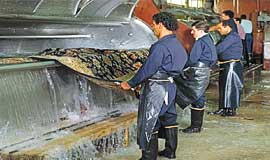 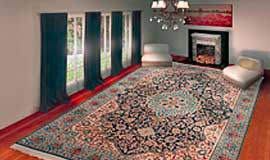 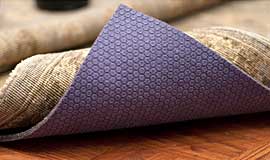 Protect your carpet and floor with a high quality padding.